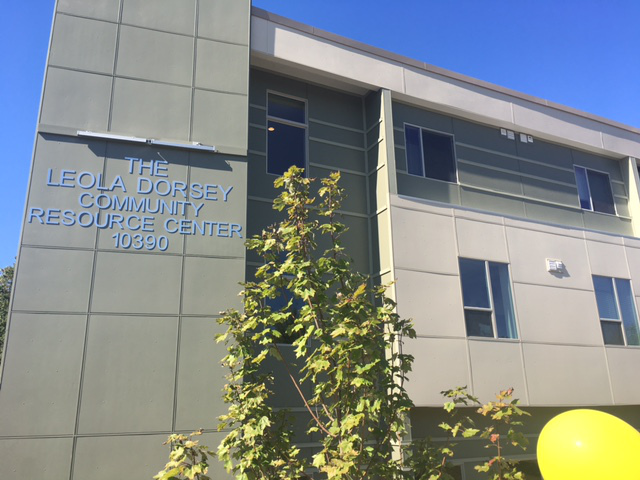 Howard County, Md. recently opened a new facility for homeless persons, the Leola Dorsey Community Resource Center.  It now houses the Day Resource Center that previously operated on Route 1, includes 35 apartments, and is based on an increasingly popular model for addressing homelessness called “Housing First.” Here is a primer on the new center and the challenge of homelessness in Howard County, Md.

(This post is an update of a previous HoCoMDcc post, “Howard County’s Latest Effort to End Homelessness”, June 21, 2016)

With its ability to serve more than 100 people a day, Engel noted that the center is able to serve at least half of the county’s homeless population on any given day. There were 214 homeless individuals in Howard County in 2016, according to state data.

The idea for the new center grew out of a recommendation from the county’s Plan to End Homelessness in 2010, which outlined goals for the county in tackling situational homeless — which occurs when stable individuals and families cannot afford housing due to job loss, injury or other disaster — and chronic homelessness, which often involves individuals with mental illness and substance abuse problems. According to the report, Howard County has primarily struggled with situational homeless.

The center’s 35 permanent residence units are also aimed at utilizing the “housing first” approach encouraged in the report, based on the concept that when an individual has stable housing, they are able to focus more energy on other tasks such as finding employment.

The Residences at the Leola Dorsey Community Resource Center

Volunteers of America Chesapeake, Inc. is a faith-based, non-profit organization whose mission is to inspire self-reliance, dignity and hope through health and human services.

The Residences at the Leola Dorsey Community Resource Center (LDCRC) is a permanent housing program that provides support services to individuals that are chronically homeless or at risk of homelessness. Supportive Services are voluntary, except for case management, and include onsite counseling support and community resources to establish opportunities for residents who need assistance towards making positive life changes necessary to achieve self-sufficiency.

The Residences has 35 single unit efficiency apartments with on-site laundry facilities. A community room for program activities and meetings is also available to the residents.

With enthusiastic support from the churches, local government and foundations, the Grassroots Day Resource Center was opened in July 2008 to better serve this population (the homeless).  The Center provides showers, laundry, clothing, internet access, phone, mailing address, basic living supplies, conversation and referrals to social services. The homeless consumers were involved in determining the services, hours of operation and policies. The Center is operated under the auspices of Grassroots Crisis Intervention Center, staffed by volunteers and guided by a project coordinator. In the first 3 months over 140 individuals were served.

In our fiscal year that ended in June 2016 we served 831 people, averaging 60 people a day. We gave away 399 pairs of shoes, over 52,000 food items, close to 13,000 clothing items, 22 tents, 54 tarps and 31 sleeping bags. We could not do this without the support of about 50 congregations in Howard County and the city of Laurel, as well as numerous organizations, companies, schools and individuals that run fundraisers, food and/or clothing drives, donate out of date but usable food and clothing items.

The summer of 2017 will finally bring us to our new building. We are looking forward to having a space all on one floor with new kitchen, shower and laundry facilities, an improved medical suite and designated office space for all the outside services we provide.

And who was Leola Dorsey?

The center is named after Leola Dorsey, an iconic civil rights activist and leader in Howard County, who grew up down the road from the site and fought for the rights of the county’s African American residents. In 1947, Dorsey was president of the newly formed chapter of the National Association for the Advancement of Colored People, among other community organizations.

Despite Howard County’s affluence, and despite an extensive system of shelters and other services, homelessness persists here. More than 200 people each day are living in shelters – or in the woods or in cars. Hundreds more are at risk of homelessness, doubled up, moving from couch to couch, or threatened with eviction.

Shelter beds are nearly always full, and about a dozen people are turned away in an average day. Emergency funds run out before the emergencies do. Families that are precariously housed often don’t get help until they’re actually on the street. The county lacks the type of supportive housing needed to get the chronically homeless out of the woods.

Homelessness is costly. Numerous studies from across the country show that the chronically homeless consume disproportionate shares of hospital and police costs. And it isn’t just the taxpayers who are bearing the cost. Homeless children are twice as likely to repeat a grade in school and twice as likely to go hungry. The Howard County Public School System last year identified 462 children who were homeless or at risk of homelessness – up 27 percent from the year before.

It doesn’t have to be that way. Homelessness is not inevitable. We don’t have to learn to live with it. It can be prevented. And other communities are showing that it can be done. Here are the keys:

This Plan shows us the way. It was drafted by the Committee to End Homelessness, at the request of the Board to Promote Self-Sufficiency. The Board was created by the county executive and county council to promote the economic stability of individuals and families and reduce the incidence of poverty in Howard County.

The Plan reviews what’s known about homelessness in Howard County, enumerates current efforts to deal with the problem, and points to a new paradigm of Prevention and Housing First adapted to the local situation.

by National Alliance to End Homelessness

Housing First is a homeless assistance approach  that prioritizes providing people experiencing homelessness with permanent housing as quickly as possible – and then providing voluntary supportive services as needed. This approach prioritizes client choice in both housing selection and in service participation.

While all Housing First programs share these elements, program models vary significantly depending upon the population served. For people who have experienced chronic homelessness, long-term services and support may be needed.

from Volunteers of America Chesapeake blog